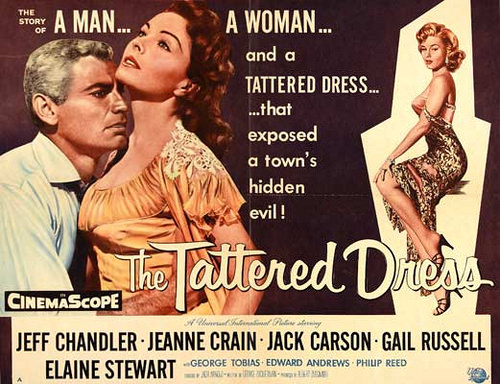 Ever wondered how films end up neglected? I was almost going to say “lost” but that’s an entirely different category; I mean movies which are viewable, accessible with a bit of effort, but neither commercially available nor presented in optimum condition. By the way, I’m not offering any answers here. I’m very bit as mystified as the next guy, and I’m really only indulging in a bit of idle musing after watching a less than perfect version of The Tattered Dress (1957). You could argue that the cast is largely peopled with actors who have drifted a little too far out of the public consciousness, although I’m not wholly convinced by that one myself. Regardless of that, the film was directed by Jack Arnold, a cult favorite if ever there was one, and yet this work remains (apparently) unrestored and stubbornly unreleased.

Cinema sometimes feels like the theater of the senses, or maybe a more sensual version of the theater. If we lose the immediacy of the live performance, we also gain something in extreme intimacy, and then in an instant we can also achieve the cool distance of an observer in a gallery. And all the while our senses are targeted and stimulated, particularly our vision and hearing. I’ve come to think that film sequences without dialogue – not silent film, just with the dialogue stripped out – come closest to pure cinema, storytelling predominantly through visuals, music and ambient sound. The Tattered Dress opens like this: with a torn frock, a breathtaking blond racing through a desert night in an open top convertible, a tense meeting with her husband, another ride and then a cool and clinical killing. And not a word spoken.

That’s the setup, a late night killing, a crime of passion by a shooter who needs a sharp lawyer to do the defending. That lawyer is James Blane (Jeff Chandler), famed for his ability to defend the indefensible and the bane of district attorneys everywhere. Blane is blunt, cocksure and beholden to one creed only, the need to win, to succeed and feed the legend of his own ego. His courtroom wizardry has seen him scale the peaks of his profession while he’s sacrificed his personal satisfaction to attain it. If his wife maintains an arm’s length relationship and his children are rarely seen, well so be it. He gets his clients off, and he gets this latest one an acquittal too, shredding the reputation of a small town sheriff on the way. However, this is only part of the story, and Blane’s moment of triumph is an imposter, disguising a comedown that will shake his faith in himself to the core. Yet perhaps he’ll learn something about himself in the process. 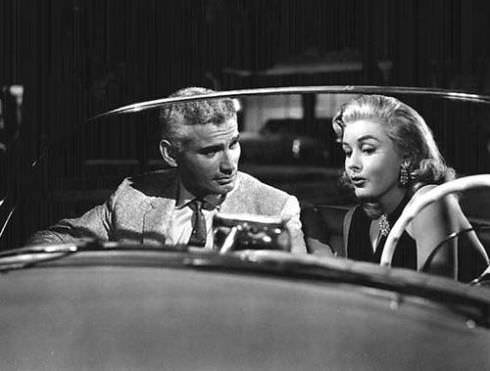 Jack Arnold is held in high esteem, and rightly so, for the Sci-Fi films he made in the 1950s. Those films, such as It Came from Outer Space and the excitingly cerebral The Incredible Shrinking Man, were landmarks not only for that genre but for genre filmmaking as a whole. Still, it would be a mistake, and a disservice to the man, if one were to classify him on those terms alone. Tucked in among his credits, one can find a brace of what I’m happy to assert are classy and superior examples of tight and economical western cinema – No Name on the Bullet and Red Sundown. Also, around the same time, Arnold was making (along with Jeff Chandler as it happens) Man in the Shadow where he took aim at small town corruption and racism. Here, under the guise of a slick legal thriller, he cast a sideways glance at the American Dream.

I’d like to think the desert setting, which Arnold seemed drawn to on a number of occasions, has some significance. Is it too much of a stretch to view that harsh and bleak backdrop as a kind of blank canvas upon which he felt greater freedom to explore his themes? Because he does dig under the surface of the glossy 50s American success story – the hotshot lawyer stirs urban/rural and western/eastern hostilities right from the beginning, and his idealized family unit (not to mention that of his smooth and wealthy clients) is shown to be anything but ideal. In short, there’s a nasty bit of corrosion creeping in beneath the chrome trim. The broken home and tarnished ideals of the man are the price he has paid in his ruthless pursuit of fame and fortune, elbowing such trifles as truth and justice aside in his dash for a questionable prize. So, at this point, let me make a proposal – that Arnold was every bit as concerned, all through his Sci-Fi, western and thriller work, with a critical examination of the flaws and  barely suppressed crises of the post-war American soul as the more critically acclaimed Douglas Sirk. While this is something I’ve pondered before, I’ll freely admit that this George Zuckerman scripted production hauled it all front and center for me – Zuckerman also wrote a number of screenplays for Sirk, including the perennially underrated The Tarnished Angels.

Now, a brief word on the performances. Jeff Chandler’s early death robbed the cinema of one of the most promising talents of the era. It has also led to an under-appreciation of his talents and abilities, but a look at any of his best roles quickly highlights his powerful screen presence. Plenty of actors, especially leading men in their prime,  are and were loath to accept what might be perceived as unsympathetic roles. Chandler, however, seemed comfortable enough taking on less than wholesome parts. The lawyer here is not a nice man, he’s a grasping and ruthless type who has lost his way, and yet Chandler embraces this negativity and offers a welcome three-dimensional portrait of ambition colliding with a hunger for personal fulfillment. Facing off against him is Jack Carson, the butt of plenty of jokes as a character player. His bulky joviality is nicely subverted here and his cool undermining of Chandler is very memorable. Jeanne Crain is the estranged wife, still in love with Chandler but proud enough to hold herself back until he rediscovers his humanity. And finally, there’s Gail Russell, that fragile beauty in the middle of a temporary comeback that was destined to be short-lived.

To finish this piece, which has ended up running slightly longer than my other recent postings, let me just reiterate that The Tattered Dress is a classy melodrama/thriller with a fine cast and on-form director. That it remains unreleased on any current home video format is something I struggle to understand. There are many films we can safely say are deserving of a high quality digital release – this is most assuredly one of them. I can only hope someone sets about rectifying this oversight soon. 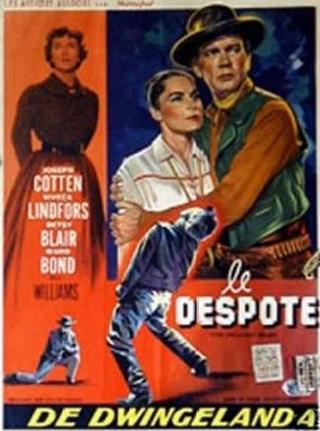 When I started this blog a good many years ago my motivation was to talk about movies, in particular westerns. At the time I felt the genre was somewhat neglected in comparison to others, and that what we might refer to as the medium efforts were passed over with depressing regularity. Films such as The Halliday Brand (1957) were what I had in mind, where a strong cast and crew worked on a project that only a smattering of people seemed to be aware of. This is a movie where the final result isn’t quite up to the level of the filmmakers’ ambition, where you have to admire the stylish execution even as you experience a touch of regret for a promising scenario which doesn’t quite gel.

The opening makes it clear that the Halliday family is a troubled one, Clay (Bill Williams) attempting to coax his brother Daniel (Joseph Cotten) back to the homestead at the point of a gun. The reason is Dan senior (Ward Bond), local lawman and hardheaded pioneer, is on his deathbed and keen to see his estranged son while he still has time. Now this is an especially dark tale of familial strife, bordering on film noir in its intensity and tragedy, and it’s therefore only appropriate that its telling should be largely undertaken via flashback. It’s here that we learn how the elder Halliday is so consumed with an unpleasant combination of racial prejudice and stubborn pride that he’s prepared to ignore the advice of his sons and his own inner voice. His inflexibility leads to a lynching that breaks his daughter’s heart, and then a pointless confrontation which drives a powerful wedge between himself and the son who bears his name. And at the center of this emotional maelstrom sits the mystically serene enigma that is Aleta (Viveca Lindfors), the half-Indian girl who has captured the hearts of both Halliday brothers. 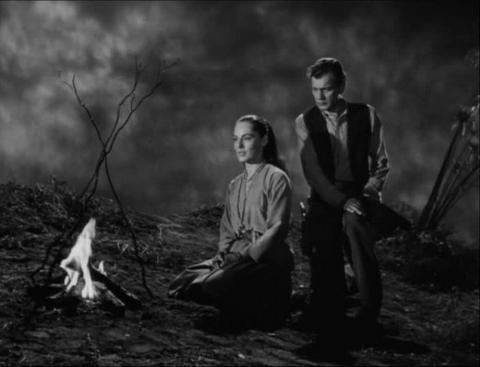 I have to say I really like the films of Joseph H Lewis; they may not always be wholly successful but there is an artistic drive and strong visual sensibility at their heart which is hard to resist. The Halliday Brand sets itself up as a classical tragedy played out against a frontier backdrop, which is a noble enough intention and one which has paid off in other productions. Here I think it works only up to a point as it feels as though there are too many themes (or too many facets of themes) competing for the viewer’s attention over its reasonably brief running time. The essence of it all is the Halliday brand of the title – the literal one is the symbol of the buried tomahawk, of conflicts resolved through strength, while the figurative one is the harsh implacability represented by Halliday senior and the barely acknowledged version of the same to be found in the younger generation. One could draw inferences from the casting of arch-conservative Ward Bond as the in such a role but it’s (in my opinion) an optional exercise and the movie still works without doing so – it’s the human drama at the center of it all that counts for more but the layered structure facilitates different levels of appreciation if desired. 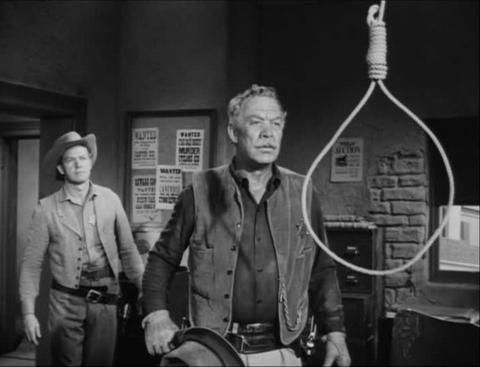 Bond is as impressive as ever in his role here, mean and manipulative to the end and an imposing, authentic physical presence. Joseph Cotten is less effective I feel, his natural reserve fits the quieter and more introspective side of his character but his performance feels somewhat mannered at times and could have used a bit more raw passion. Swedish actress Viveca Lindfors sounds like an odd choice to play a half-Indian girl but her striking beauty, photographed with superb skill by Ray Rennahan, works in her favor and I found her credible in the role. In support there is good solid work done by Bill Williams, Jay C Flippen and a virtually unrecognizable Jeanette Nolan.

The Halliday Brand is available on DVD from the US via the MGM Manufacture on demand line. It looks like an older television master was utilized, meaning an acceptable if unspectacular image in terms of clarity and contrast. However, bearing in mind this is a 1957 production, it’s almost impossible to see how the Academy ratio presented on the disc could be correct. That aside, the film is a moderately successful example of western noir – the classical aspirations don’t all hit the mark but the attempt remains a stylish and entertaining one.